The Ultimate Guide To Kayaking With Manatees In Florida- 10 Best Places! 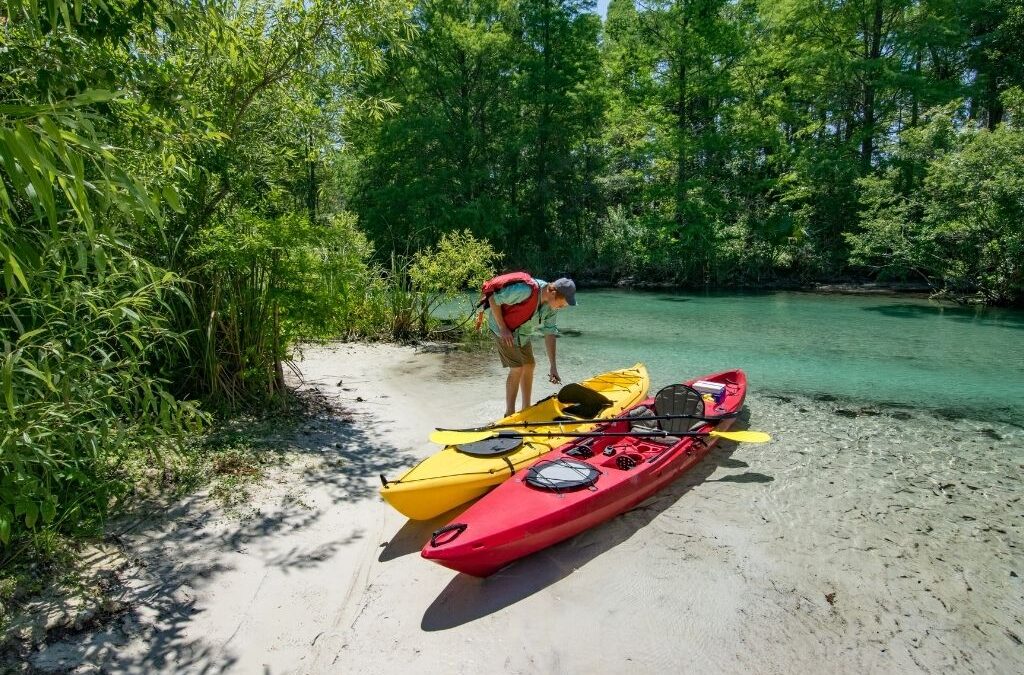 Kayaking with manatees in Florida is an awesome experience. Known as sea cows, manatees are so friendly and curious, and they love to play in the water.  Kayaking with them is the perfect way to get up close and personal with these amazing creatures.

There are a few things to keep in mind when kayaking with manatees, though.  First of all, make sure you’re respectful of their space.  They’re wild animals, after all, and they deserve to be treated with respect.

Secondly, be aware of the tides and currents.  Manatees are very sensitive to changes in water levels, so it’s important to be safe and not disturb their natural habitat.

These gentle giants will make you feel right at home in their watery world, and you’ll create great memories. 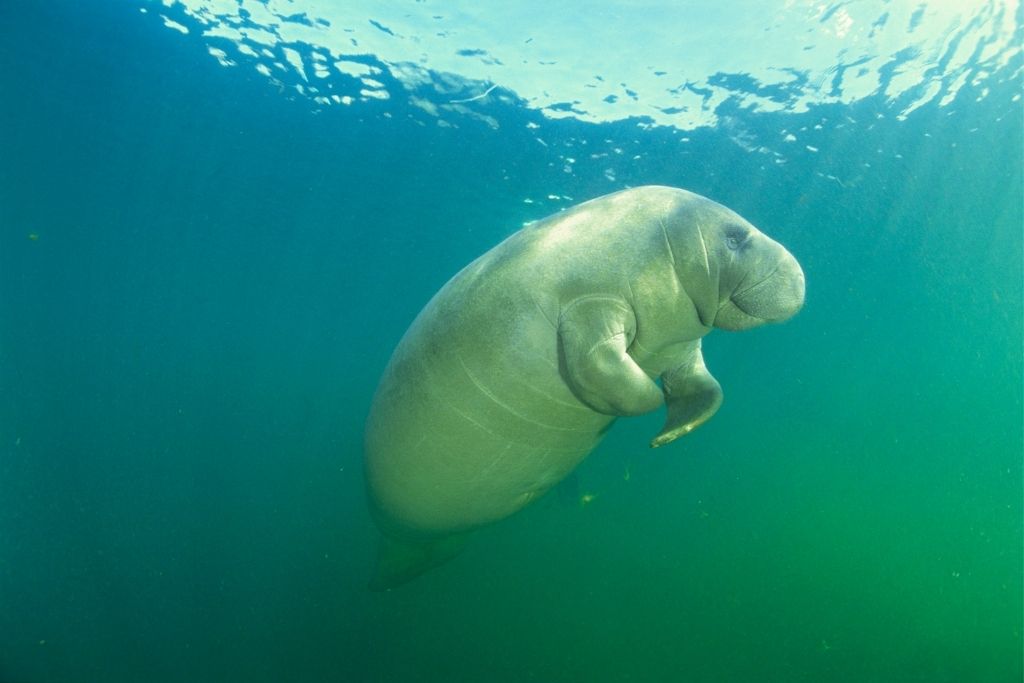 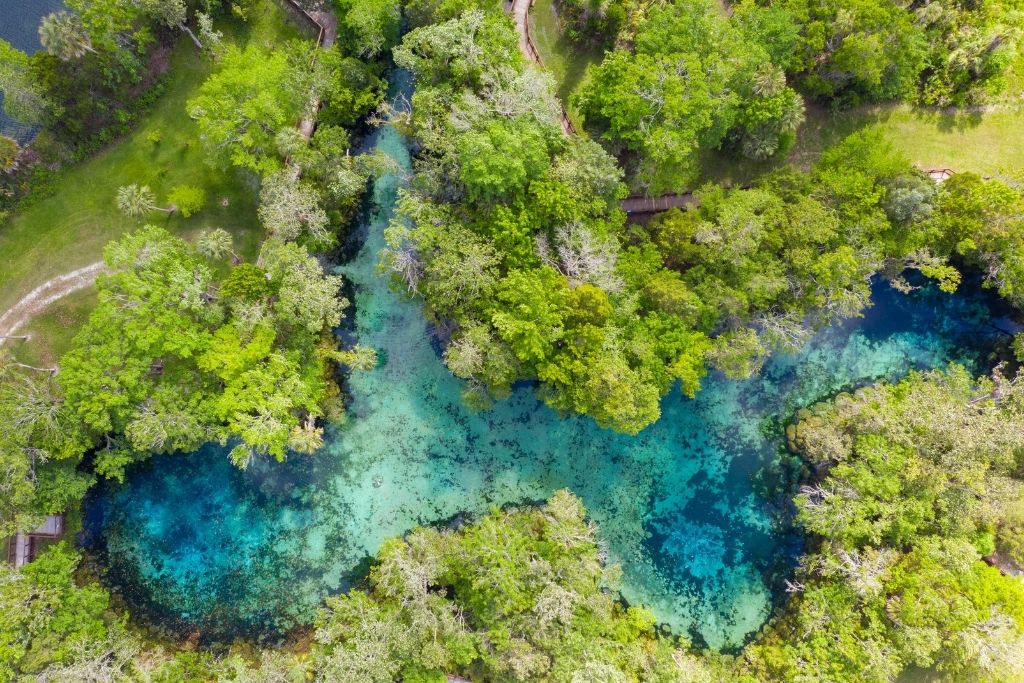 Due to its large manatee population, Crystal River, Florida is one of the best places in the world to go kayaking with manatees.  These sea mammals are a delight to see up close, and kayaking is the perfect way to do it.

At just 90 minutes from both Orlando and Tampa, Crystal River is an optimal Florida location and has ideal temperatures for manatees at just above 70 degrees year-round.

Hundreds of manatees migrate here from the Gulf in the cooler months to the spring’s warmer waters.

King’s Bay and Three Sister Springs are popular sites to explore while at Crystal River.

If you’re looking for a fun and unique experience, come kayaking with manatees in these clear blue waters.

Not only is this a great kayaking spot, but you can also swim with manatees here.

Most places do not allow you to swim with manatees since they’re endangered and protected, but at Crystal River, you are legally allowed to.  (It’s estimated that there are around 5,000 to 6,500 manatees in the wild).

This is a one-of-a-kind opportunity that you don’t want to miss out on.  The crystal clear water and lush vegetation make for a picturesque backdrop as you explore this natural wonder. 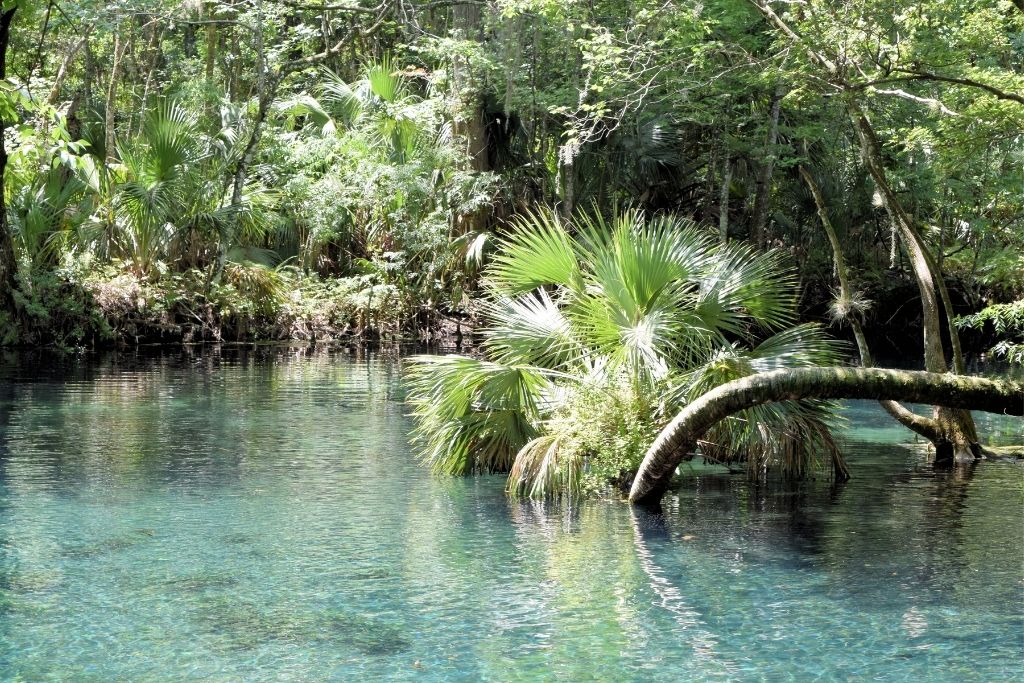 Located near Ocala in north Florida, Silver Springs is one of the biggest artesian springs in the world, and also one of the best spots in Florida to see manatees.

The clear waters make it easy to spot them swimming around or lounging on the bottom.

And there’s no better way to get in a close range of these amazing creatures than by kayak.  Take out the kayaks for a leisurely paddle through the crystal-clear waters of Silver Springs.

You can also do glass-bottom boat and clear paddleboard tours here.

You’ll love getting up close and personal with nature here.  It’s sure to be a memorable experience for your entire group!

November through February are the best months to visit Silver Springs.

Other nearby areas to visit include Salt Springs and Silver Glen Springs, which are both in the Ocala National Forest. 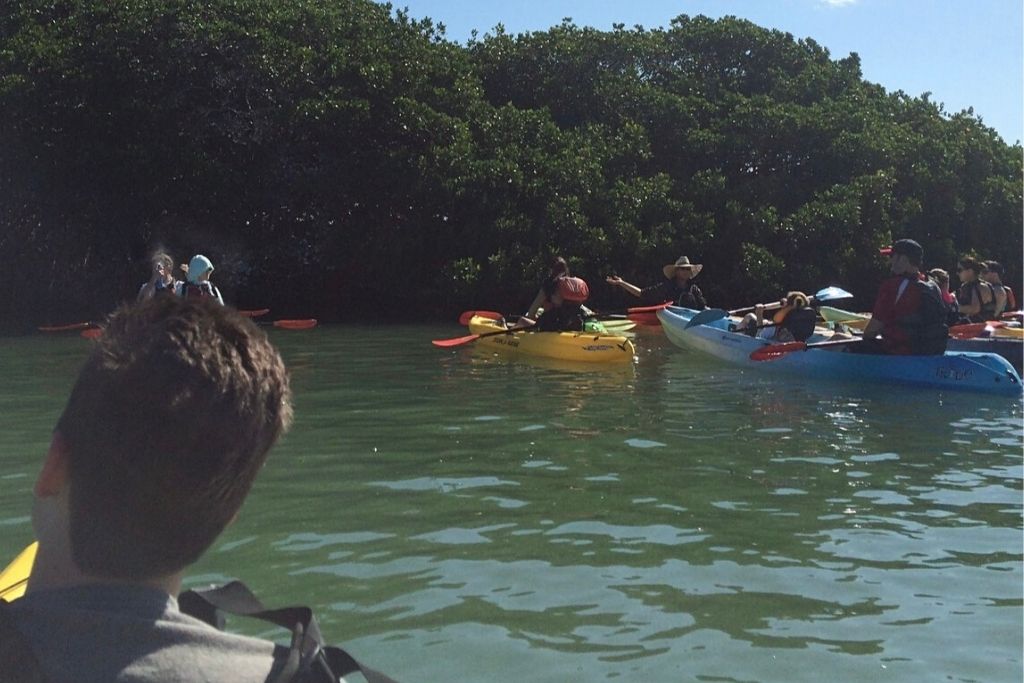 Located next to Sarasota, Florida, Longboat Key and Anna Maria Island are perfect destinations to go kayaking with manatees and see other wildlife, such as dolphins, crabs, and sea horses.

We booked a guided kayaking tour through Happy Paddlers, but you can also rent kayaks and they offer lessons to beginners.

If you’re looking for more options on the water, they have sunset or mangrove kayak tours, and kayak fishing charters, as well.

The tour guides here are really knowledgeable.  Our guide took our group through the calm, shallow waters and around the area islands, past the Longboat Pass Bridge, which is between Longboat Key and Anna Maria Island.

While at Longboat Pass Bridge, you can get out and go swimming or just take a stroll on the beach.  The cool thing about this area is that it’s where the Gulf and the Bay intersect, making it a popular area for manatees and wildlife.

Kayaking with manatees in Florida is an unforgettable experience! 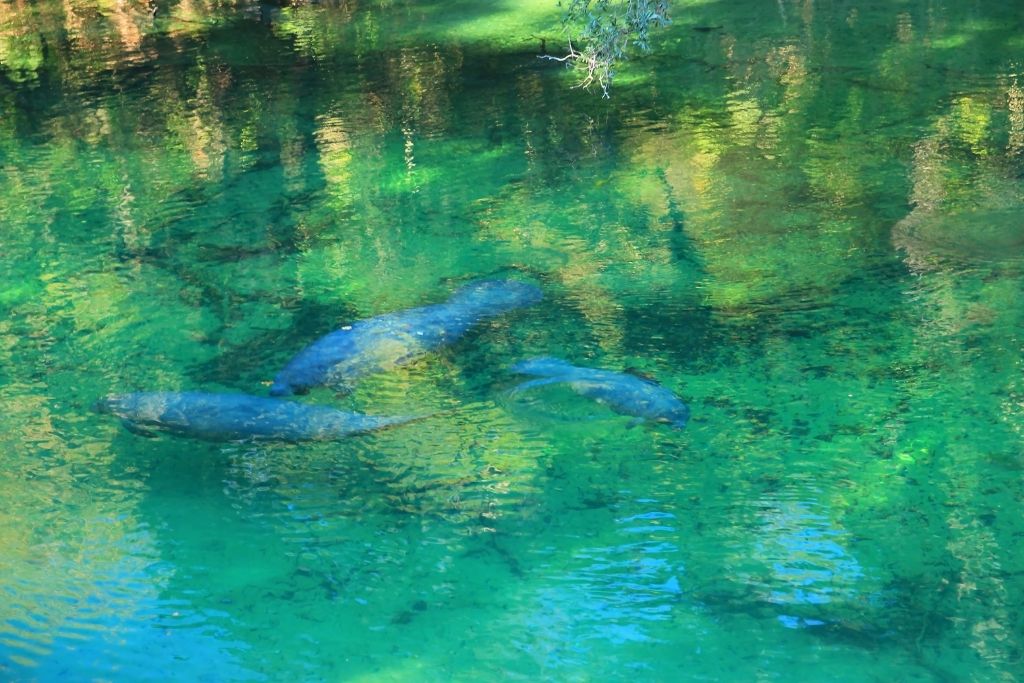 With crystal clear water and an average temperature of 72 degrees, the park offers visitors the opportunity to view manatees in their natural environment.  The optimal time to visit Blue Spring is November 15 to March 15.

There have been close to 700 manatees documented here in the winter months.  You may even see eagles, ospreys, or other wildlife while here.

Whether you’re an experienced kayaker or just looking to get out on the water for a few hours, Blue Spring State Park is definitely worth a visit.

With all that this beautiful park offers, you won’t be disappointed.

East of Orlando in Spring Hill, Weeki Wachee Springs is one of the most iconic tourist attractions in Florida.

The springs here are the perfect place to explore Florida’s natural beauty and have some fun.  These kayaking tours are a great way to get up close with manatees.

The water temperatures here are between 72 and 74, and are a perfect environment for these friendly creatures.

There are also other kinds of wildlife here including turtles, fish, otters, and birds. 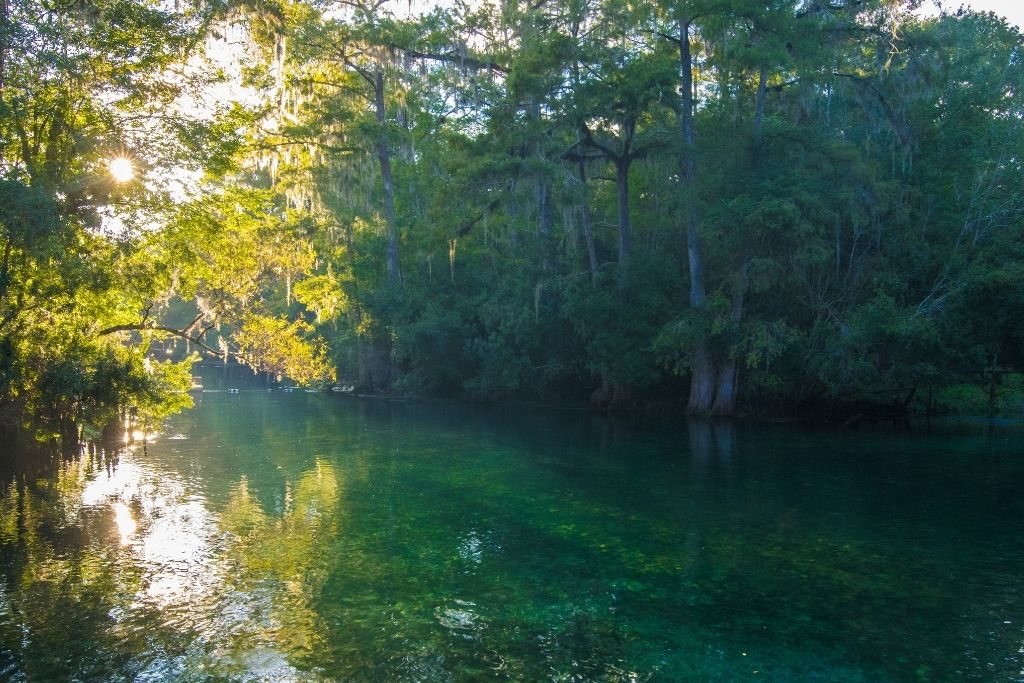 Located an hour southwest of Gainesville, in Chiefland, Florida, this park is home to some of the most beautiful natural features in the state, including first-magnitude springs and a boardwalk through a cypress forest.

It’s also a popular spot for kayaking and canoeing, thanks to the manatees that come here in droves during the winter months.

Make sure to visit in January or February to see these gentle giants up close!  There’s nothing quite like getting close to nature and enjoying its beauty firsthand.

Not only can you kayak with manatees, but you can also go scuba diving, boating, fishing, and camping.

And with 8 miles of off-road trails for hiking and biking, there’s something for everyone at this beautiful state park.

This is a one-stop shop for all your Florida adventures. 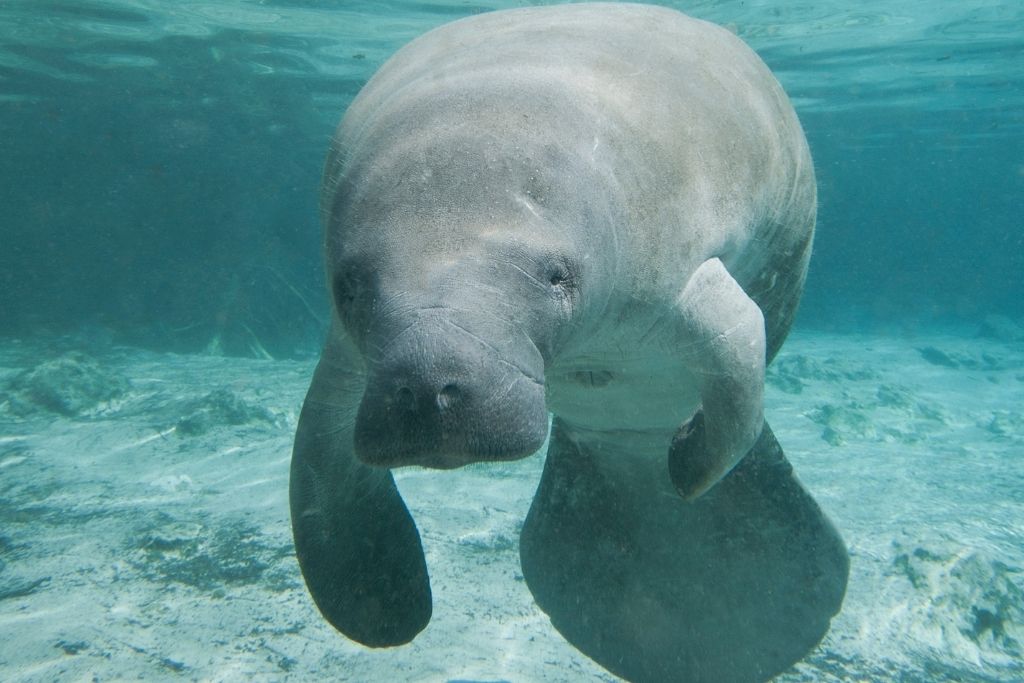 Manatee Park is the perfect place to go kayaking with manatees.  The park offers beautiful waterfront views and it’s common to see manatees here from December to March, with the peak months being January and February.

You will never forget this incredible experience of paddling alongside these beautiful animals.

The park offers kayaks and canoes for rent, as well as a variety of other amenities, making it the perfect place to spend a day or afternoon outdoors.

You can also do paddleboarding tours in nearby Bonita Springs.

Lovers Key State Park is in nearby Fort Myers Beach and a great place to get out on the water in kayaks and see manatees. 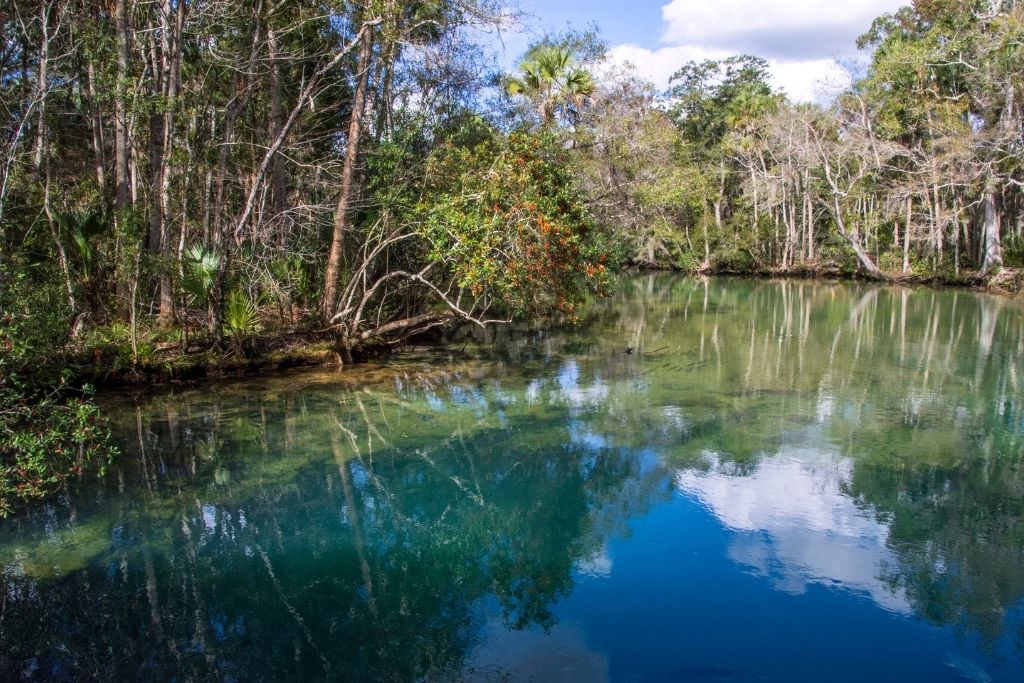 Homosassa Springs is just south of Crystal River and another ideal spot to kayak with manatees.

This is a popular location for manatees to dwell since the area waters are about 72 degrees year-round and flow right into the Gulf of Mexico.

Another interesting fact about Homosassa Springs is that you can find both freshwater and saltwater fish here.

These kayaking tours are the perfect way to explore the beauty of Homosassa Springs.  You’ll have a chance to see manatees in their natural habitat, and you can even paddleboard and swim with them!

They offer guided kayak tours here which are perfect for anyone who wants to get up close and personal with these gentle giants.

There are several different tour options, so you can find the perfect one for your needs.  And you won’t find many more beautiful places to kayak than Citrus County, Florida.

You can also bring your own kayak and launch for free.  Be sure to kayak by Monkey Island and get some pictures while here.

This little island haven is home to a few monkeys; you are not allowed to go on the island, though. 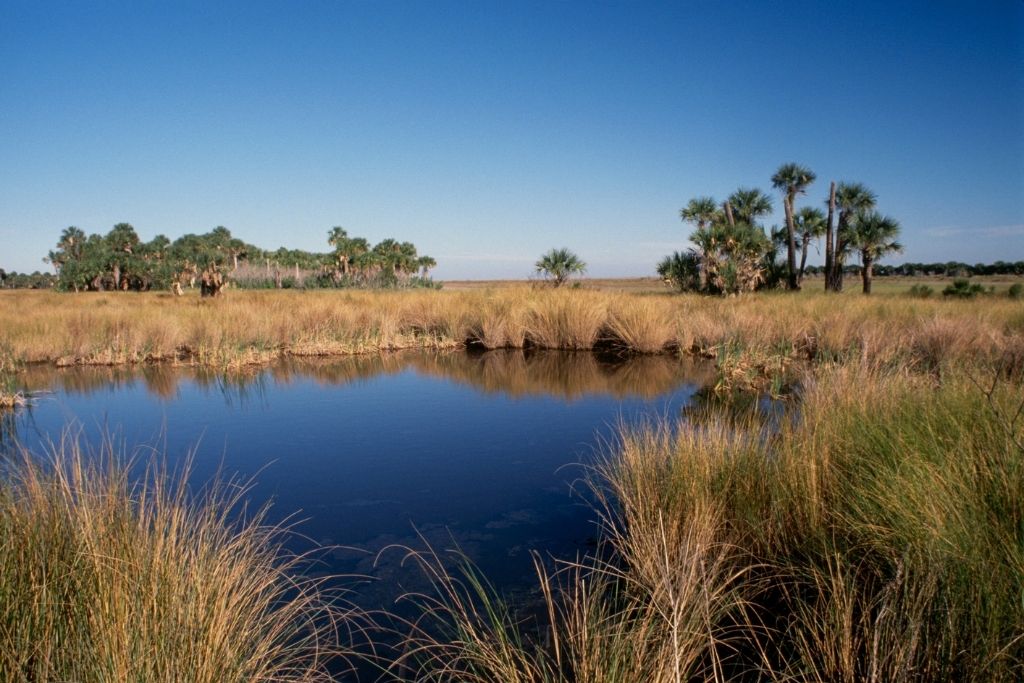 With all of the other locations on this list either on the Gulf Coast or Central Florida, we had to include one area on Florida’s Atlantic Coast!

Merritt Island is just north of Cocoa Beach on the Space Coast and is a notable area for kayaking with manatees in Florida.

Not only will you get to see these beautiful creatures up close, but you’ll also have the chance to explore the many other wonders of Merritt Island National Wildlife Refuge.

This is a place where nature lovers and outdoor enthusiasts can truly come and enjoy all that Florida has to offer.

Haulover Canal connects Indian River Lagoon and Mosquito Lagoon, and is a nice area for kayaking and seeing dolphins, manatees, and other wildlife.  It’s a popular area for fishing, too.

If you’re looking for more great views of manatees and dolphins, visit the nearby Manatee Observation Deck, where these species can be seen all year.

Another nearby place to visit to see manatees is Manatee Sanctuary Park in Cape Canaveral, where they’re known to eat the seagrass along the riverside boardwalk. 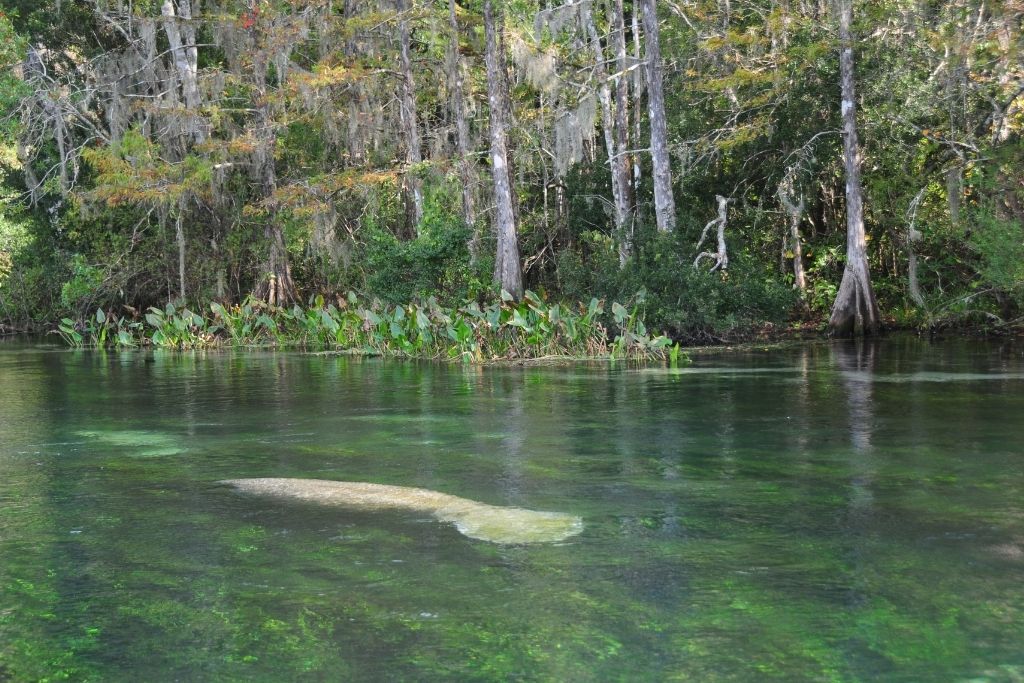 One of the most unique tourist destinations in Florida, Wakulla Springs has the world’s largest and deepest freshwater springs, filled with alligators, manatees, and other wildlife.

This is the perfect place for anyone who wants to explore nature at its finest.

With kayaking, riverboat tours, and ancient cypress swamps, there’s something for everyone at Wakulla Springs.  There’s also hiking, camping, fishing, and a host of amenities for visitors here.

And if that wasn’t enough, many manatees reside here year-round – so you’re guaranteed to see some amazing wildlife.  You’re most likely to see manatees under the diving tower here (near The Lodge At Wakulla Springs).

Note: You can not swim with manatees here.

Is it safe to kayak with manatees in Florida?

Yes, manatees are safe to be around and kayaks are a great way to get close to these animals without disrupting their everyday lives.

Although they average about 10 feet long and can weigh up to 1200 lbs, manatees are generally slow movers and friendly creatures; they also do not have teeth.

Just be sure to keep your distance so as to not startle them and avoid contact.

What are the best months to see manatees while kayaking in Florida?

The common months to see manatees when kayaking are December through March, with January and February being peak times.

Manatees tend to leave the Gulf when the temperature in the water gets down in the high 60’s.

You may be able to see manatees during the summer months but it’s less likely.

Early in the day is also considered the best time of day to spot manatees.

√ Do observe the manatees from your kayaks but don’t chase them.

√  Do swim next to manatees but only where it’s allowed and don’t feed, touch, or harass them.

√  Do give manatees plenty of space if they are in your vicinity, don’t be loud and splash around when near them.

√ Do paddle around manatees, don’t paddle over them.

Kayaking with manatees in Florida is an amazing experience that everyone should have at least once in their lifetime.

These gentle giants are so friendly and curious, and kayaking gives you a great opportunity to get up close with them in their environment.

Just be sure to follow the guidelines set by the park and kayak rental company and respect the manatees’ space, and you’re sure to have a wonderful time!

For more wonderful experiences in Florida, check out these day trips from Orlando!

Book Your Next Trip!  For Accommodations and short-term rentals, I recommend Booking.com as they are the best in the business when it comes to rates and places to stay.

To Book Activities- For activities, I suggest booking with Viator, they have thousands of 5-star activities to choose from!

Looking To Start Your Own Travel Blog Or Take Yours To The Next Level?

Check Out This Free Workshop!– I personally joined Scale Your Travel Blog in 2021 and my website has grown exponentially.

Keep Up On The Adventures!

From Florida, The Caribbean, and the Atlantic Coast, my goal is to give you ideas for the best beach vacations and experiences!

Read more about my travels here!

35 Fun Things To Do In Destin, Florida And Nearby!

17 Amazing Things To Do In Seaside, Florida (+Best 30A Beaches)!

16 Things To Do At The St. Pete Pier And Nearby